This post will explain basic electromagnetism concepts. Therefore is destined for beginners in the area.

All matter is made of atoms. An atom is a particle organization with positive charges (protons), negative (electrons), and neutral (neutrons).

The Coulomb’s Law determine that the repulsion or attraction force between charges is inversely proportional to distance, in other words, closer, greater the force and further, lesser the force.

F is the electrical force, d is the distance between the charges, q1 and q2 are charges values in coulomb (C), \varepsilon _o is the vacuum permissibility constant which value is 8,85\times 10^{-12} C^{2}/N\cdot m^{2}. You can also adopt is following constant:

Every point in an electric field has a electric potential. Just like the electrical force is inversely proportional to the distance, but not at square of distance.

Potential difference between two points in an electrical field which is not in the same equipotential surface.

Potential difference is also called tension. When two points are linked with a conductor, it is created a current, which come from greater potential to the lesser. Actually the electron flux is in the opposite direction of current flux.

Continuous current (CC) can be obtained with batteries and DC sources, while alternate current (CA) is obtained in the electrical outlet in homes.

The directions of current and field are determined by the right-hand’s rule.

Equation to calculate the force: 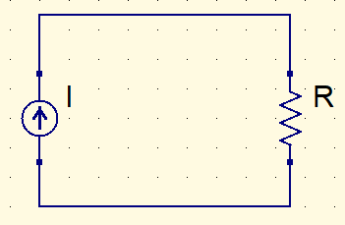