Ballbot is a type of robot which moves above a ball. How it works and balance itself? It is this post’s subject.

What the utility of robots balancing above a sphere? The ballbots can move in crowded areas faster and more flexible than robots with wheels. Other types of mobile and industrial robots stay in areas designed to accommodation of those robots. The ballbot can be used in work environment with great number of people circulating and move well in many environment made for humans.

Those robots have dynamic stability, which is the ability to keep the balance after receive an external force. How they keep this stability? They have a inertial measurement unit which has a gyroscope and an accelerometer to each axis to detect motion of pitch (axis y), scroll (axis x) and yaw (axis z). 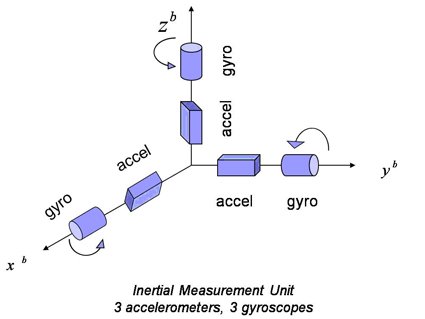 The mesures of inertial measurement unit (IMU) go to a computer control. The computer pass the commands to a traction system which moves the ball with wheels or bearing similar to a PC mouse. 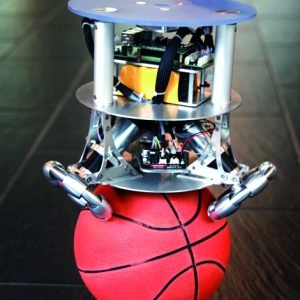 When the ballbot is stopped, the gravity center stays above a point where the ball touch the soil, called support center. To move, the robot turn a little the ball to the opposite direction to the desired to move the gravity point and tilt the body. 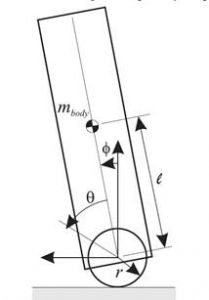 Then the ball is turned to the desired direction. To stop, the ball must turn again in the opposite direction. This way, the gravity center stays in the same vertical direction of support center.

This is the ballbot basic architecture. 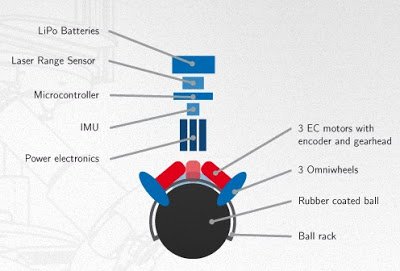 The motors which move the ball are brushless and have an encoder (an optical sensor which measure the rotation). The LiPo batteries stay on top, the laser sensor is to measure the way’s range. Here we have another example of architecture without the laser range sensor.

This robot’s traction system in details. 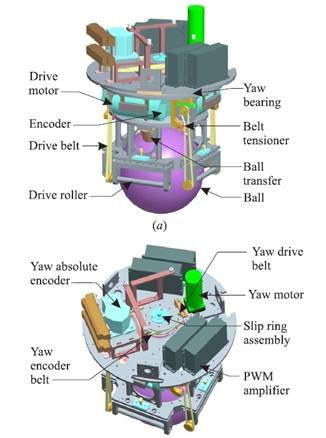