Control robots, computers and other machines with thought is possible with brain-machine interface. It is this post’s subject.

Exist two types of brain-machine interface. The non-invasive uses an electroencephalogram (EEG) to get brain’s electric activity. The operation of EEG is in button below.

The big majority of brain-machine interfaces are non-invasive. Advantages are low cost and easy to use. Disadvantage is lower precision, because the skull attenuates signal and disperse brain waves. Invasive interfaces use electrocorticography (ECoG) or brain implants. 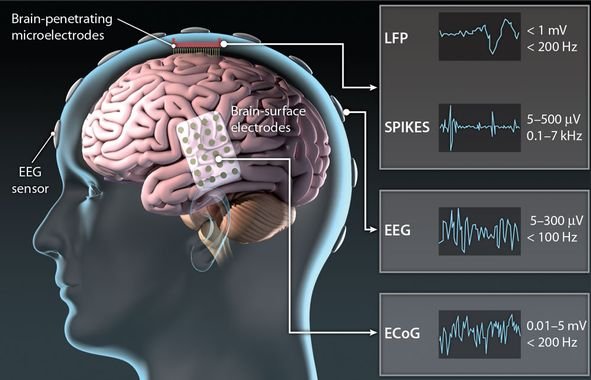 Consists in use an electrode array in brain’s surface to capture electric signals. 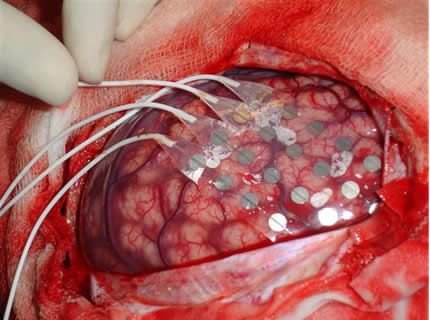 Electrodes usually are made of platinum or stainless steel alloys embedded in silicone or teflon flexible array. 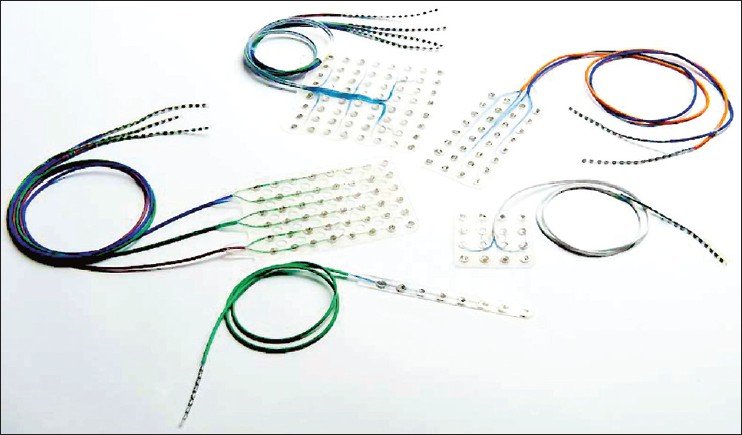 This procedure can get a big area and has better precision and resolution than EEG, however it is more expensive and can have complications. Although the risk of complications is lower than with implants. Some sources call ECoG semi-invasive.

This method is more invasive than ECoG. An array of metal filaments are implanted directly in the gray mass of brain. Must be flexible to not cause damage to brain tissue and have platinum coated blunt tips.

The implant size in comparison with a coin. 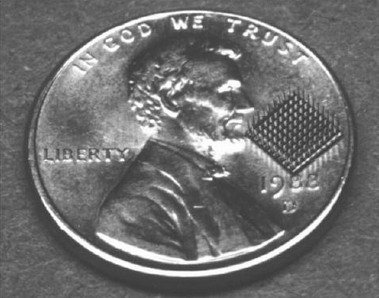 These implants cause an inflammatory response, which increases the electrode’s impedance, can cause signal loss. The signal quality is the best because the electrodes array receives directly from neurons.

The acquired signals go to a multichannel system, where are amplified, filtered and digitalized in an analog-digital converter. After digitalization, must find unique features of signal which have relevant information and represent the person`s action. This is the feature extraction and can be made by genetic algorithms. Next stage is to interpret signal features and transform in command orders. This task can be done by artificial neural networks, dynamic Bayesian networks ou Wiener filters, the latter will be subject to a future post.

Control of robots and devices

When a robot or device receives order from computer, the user receives a feedback while observing, listen or feel the motion and action of machines. Feedback produces a pattern of electric activity in brain which is detected by brain-machine interface. The control of machines and devices by thought is a closed loop. 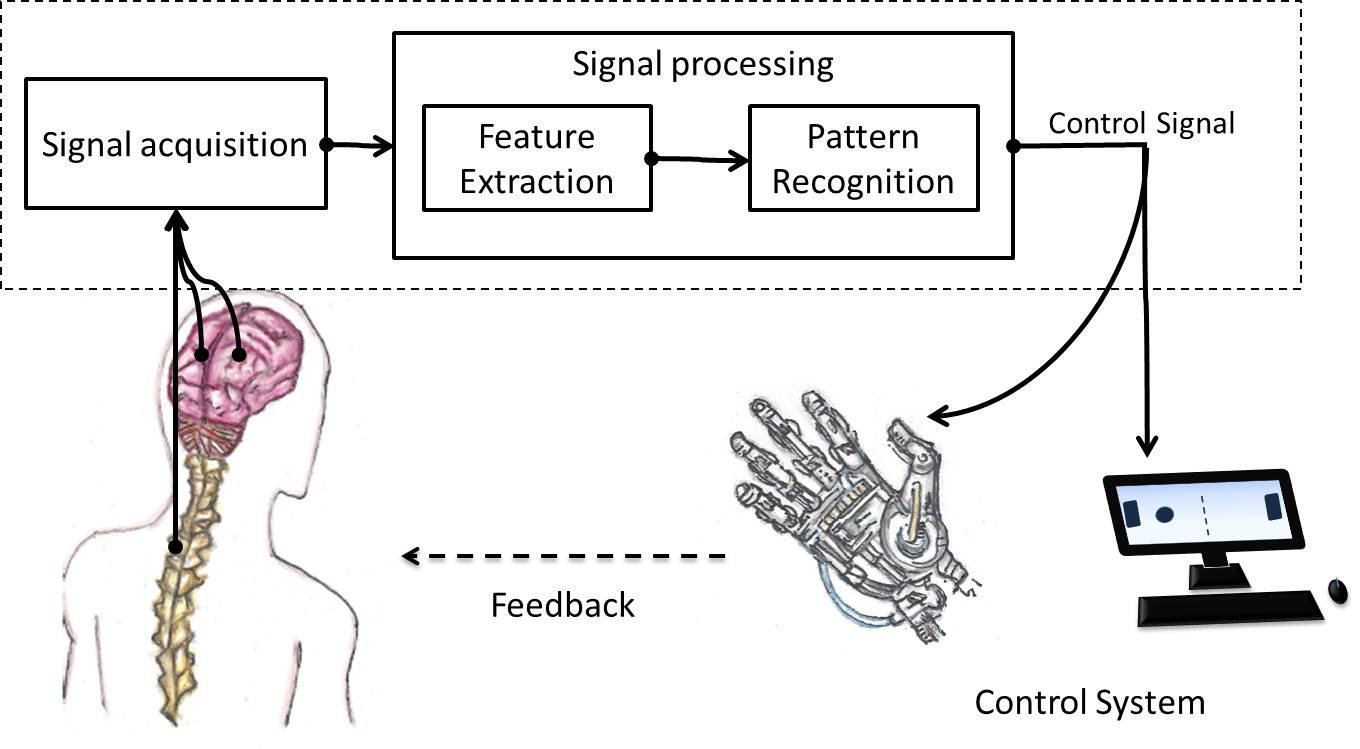 Feedback is important to improve control and performance of brain-machine interface and train the operator to use it. Brain-machine interface learns signals associated to operator`s commands. The commands can be sent through internet and control a robot in the other side of planet. In 2008, a monkey called Idoya from North Carolina, USA, was able to control a robot`s legs in Kyoto, Japan. In the beginning used a running mat, then starts to control the robot only with brain. 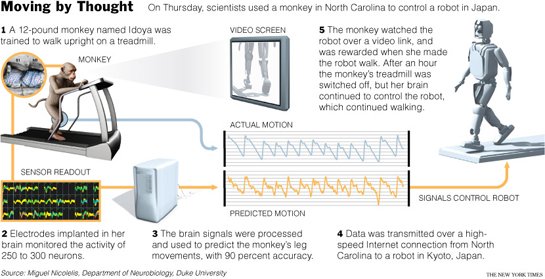 In addition to control robots, will appear video games which can be controlled only with thought. Will be possible to use TV, computer and other home appliances with mind control. 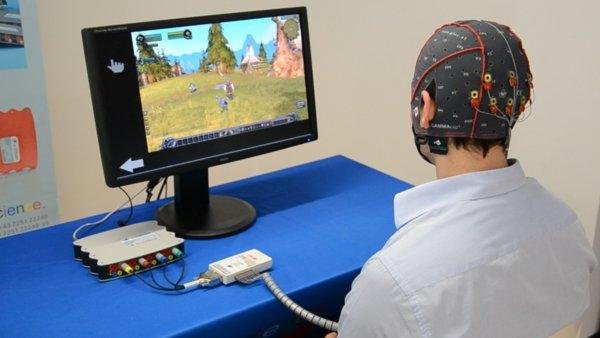 Physically disable people can have new limbs or walk again. 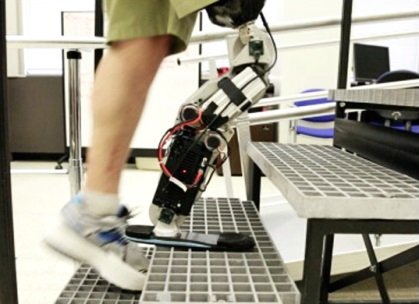 This technology can be used in exoskeletons and robotic avatars, these and other application will be subject to future posts. 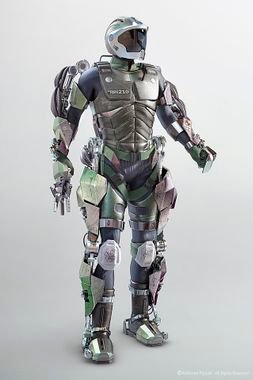 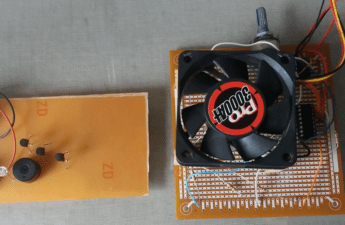