MIMO means Multiple Input Multiple Output, consist in both the transmitter and receiver have more than one antenna. It is one of the key technologies of 3G and 4G wireless communication.

Objects and obstacles in the path between the transmitter and the receiver scatters the signal, increase the error rate and decrease the data speed, the MIMO system allow the signal to take many paths and use the obstacles to advantage, increasing signal-to-noise ratio (SNR) and link data capacity.

In the MIMO system, each transmitter antenna sends signals to all receiver’s antennas, the receivers antennas receive distorted signals, however if you combine all the distorted signals you will get a more reliable signal. With multiple transmitters, it is possible to transmit many information “streams” from multiple antennas in parallel, this is the principle of Spatial Multiplexing. 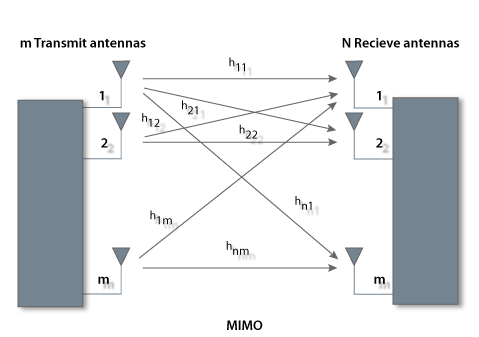 You can model the m transmit antennas as a vector as the dimension of vector equal to the number of antennas, the N receive antennas as another vector, the MIMO channels form the matrix and don’t forget the noise. The model is like the figure below. 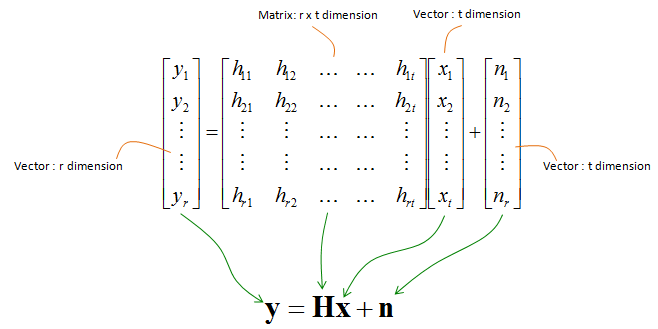 H is the MIMO channel, y the receiver vector, x the transmitter vector and n is the noise. h is the channel coefficient.

To the system MIMO work properly, you must add coding techniques so the receiver can detect the correct data. I will talk about two techniques: Space time blocks code and Alamouti code.

The Space time blocks code uses spatial and time diversity and transmit many copies of the data to compensate the fading and thermal noise. In this coding, the transmitter vector become a matrix, lines are time-slots and rows are antennas. 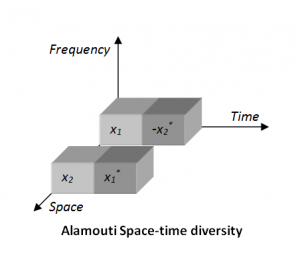 Transmission for the first period:

Transmission for the second period: