Has been launched the Xbox Adaptive Controller, a Xbox control to disabled people play the Xbox One.

The new hardware can be used for game play with an Xbox One console or Windows 10 PC, and it offers Bluetooth plug-and-play compatibility.

It supports Xbox Wireless Controller features such as button remapping, and it connects to external buttons, switches, joysticks and mounts. Microsoft developed the Xbox Adaptive Controller to enable gamers with physical disabilities to customize their respective setups.

In case you don’t know what is Bluetooth, click in this button.

In the place of small joysticks that typically are controlled with a user’s thumb are two round light-touch-enabled pads that players can use by rolling their palms on them or pressing with their hands. These offer essentially the same level of precision as the thumb joysticks on a normal controller, but they have an added option of providing an audible cue for another layer of sensory input.

The Xbox Adaptive Controller also features a standard D-pad, an Xbox power button, and a profile button that allows users to shift among several mapping options.

This is the controller’s complete set. 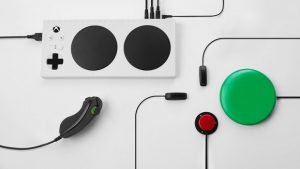 This controller was made for people with disability in hands. It is possible to play one hand with a normal controller and another with the Xbox Adaptive Controller.