When it was invented?

Contrary to what many people think, wasn’t invented in this century. In 1981, Hideo Kodama created the first fast prototyping process by stereolithography. In 1984, the french Jean-Claude André, Olivier de Witte, and Alain le Méhauté created the method to solidify liquid monomers with a laser. Three weeks later, in California, Charles Hull applied the method to create parts, hardening the resin layer by layer.

The 3D printer becomes more accessible due to the cheapness of manufacturing and printing methods costs.

First, an object’s tridimensional model is designed on a computer through CAD software. The CAD file is transferred to 3D printer connected to the computer. After that, the 3D printer uses software that compiles the file and divides the model into horizontal layers.

It’s the cheapest and most common 3D printing. The plastic filament is pushed through a set of gears and pulleys, heated by a resistance until the melting, and conducted to a nozzle, to be deposited one layer at a time.

The model is built controlling two stepper motors for x and y coordinates. When it finishes printing a layer, the surface moves on z-axis with another stepper motor.

Instead of a filament, is used a powder which fills a chamber. The powder can be plastic, nylon, or metal. The material must be heated to a temperature slightly below the melting point. The machine has a leveling roller. A high power CO_{2} laser is reflected by a mirror and causes powder melting. The mirror is controlled by a galvo motor system to make laser scanning.

The laser makes the model’s cross-section in a layer. After printing a layer, the leveling roller puts more powder from supply chamber to the one where the part is being made. Below the chambers, there are pistons that help in raw material transfer. The central piston goes down while the adjacent ones go up, until the model is ready. After printing, must wait for the object to cool down.

The term was coined in 1986 by Charles Hull. A vat is filled with a liquid resin sensitive to ultraviolet light. A HeCd (Helium-Cadmium) high power laser, whose direction is controlled by a galvo scanner, solidify the layer hit by laser. Just like in FDM, the object must have a support base.

After the first layer finished, the mobile platform goes down and the laser makes another model’s layer. The process is repeated until the complete printing. After printing, object must be in a chemical solution to remove excess resin and put in an ultraviolet oven to be hardened. 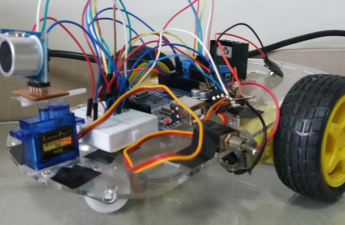