I was in Geneva, Switzerland, and I visited the European Organization for Nuclear Research (CERN). This site shows permanent exhibition for visitors. 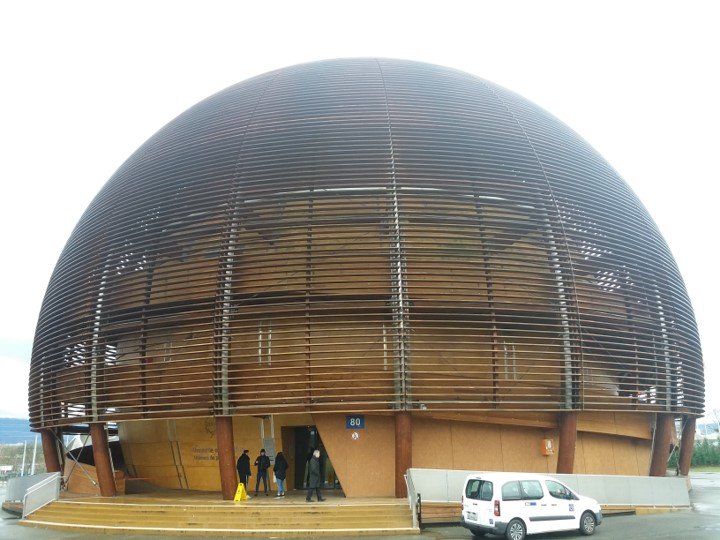 First part about visit to CERN shows permanent exhibition Universe of Particles. It’s inside the Globe of Science and Innovation, the structure above. This is Globe’s interior. In Globe’s interior, there are spherical panels which explain physics concepts. 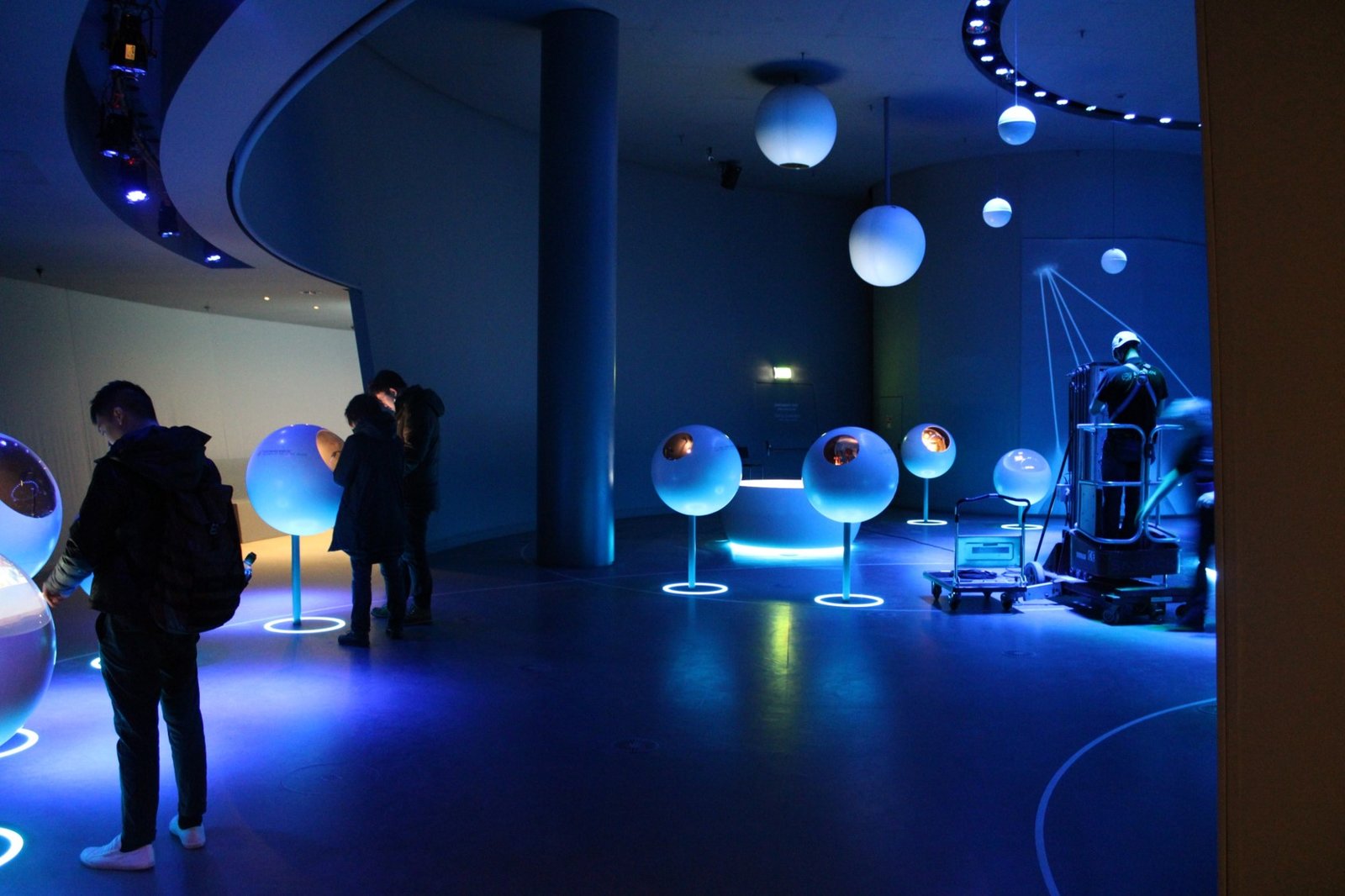 This panel explains history of Universe, scales of temperature and matter size. 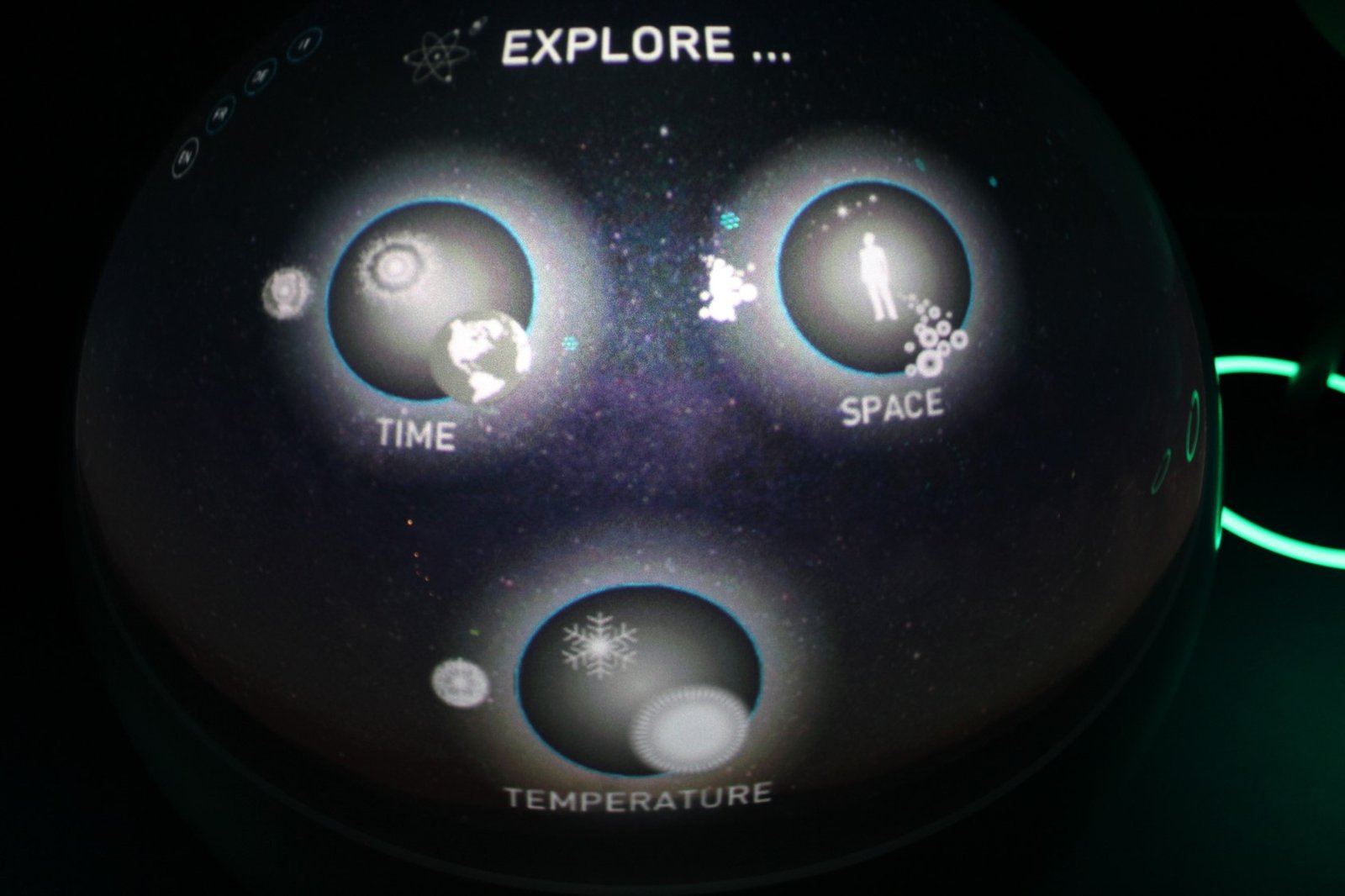 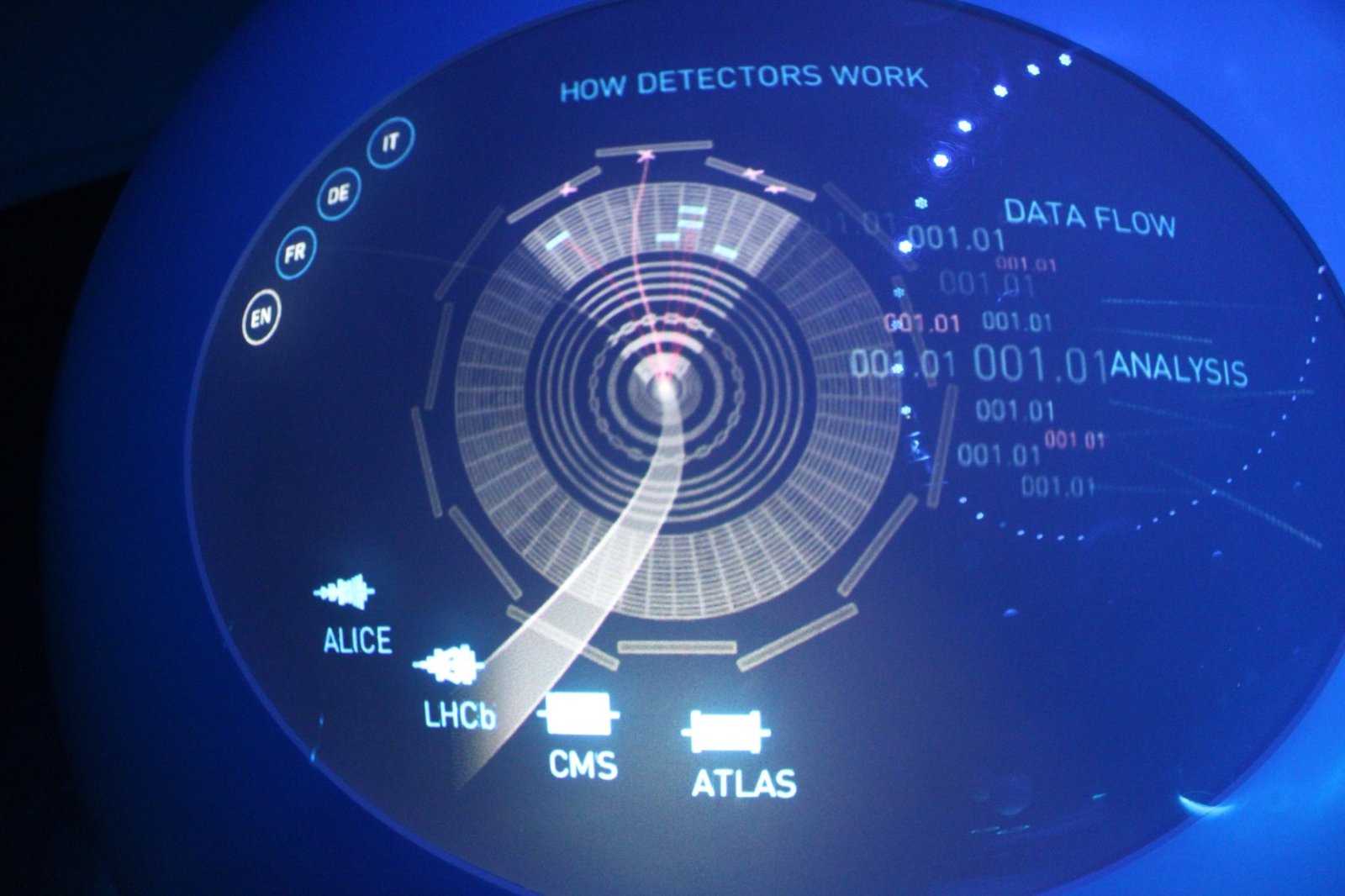 In minutes are told the history of Universe, since Big Bang to presente in many languages. Screens are turned on and appear a light effect. 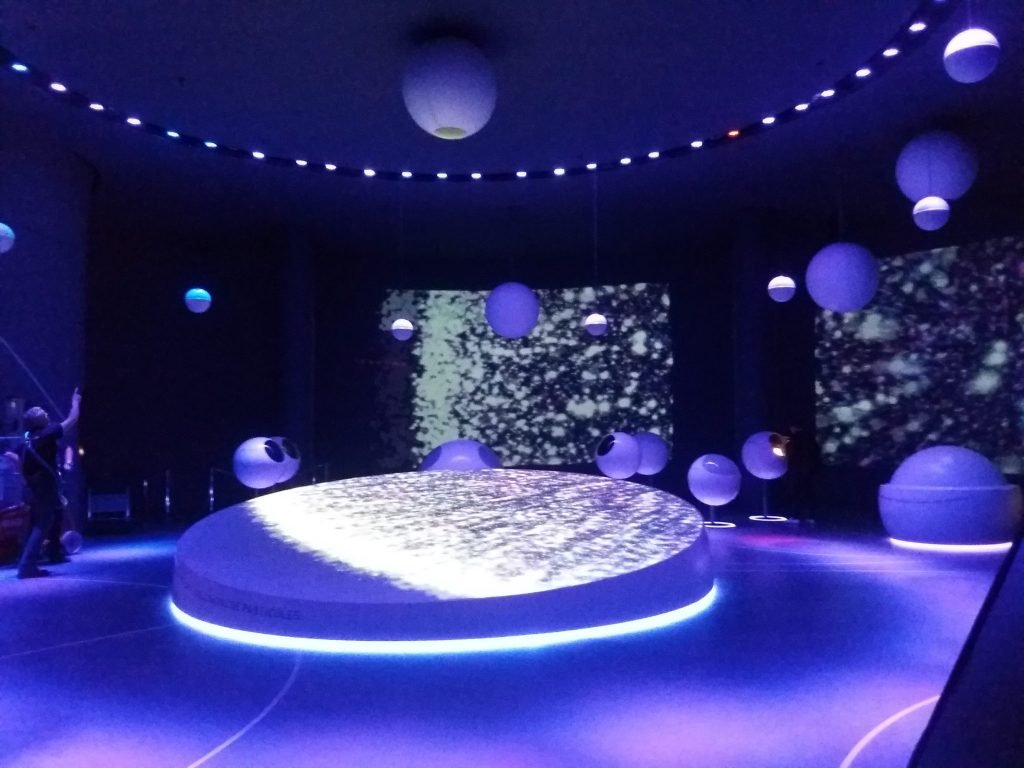 This is the first particle accelerator, the “Cyclotron”, invented by Ernest Lawrence, in 1930. Cost only 25 dollars and could be held by one hand. An alternate electric field between two semicircular electrodes accelerate protons. A constant magnetic field makes protons follow a spiral trajectory, when earn energy. Reach 80,000 eV after 100 turns. Where did protons come from? From hydrogen tanks like this one. Hydrogen atom consists in one proton and one electron. The later is removed with an electric charge. 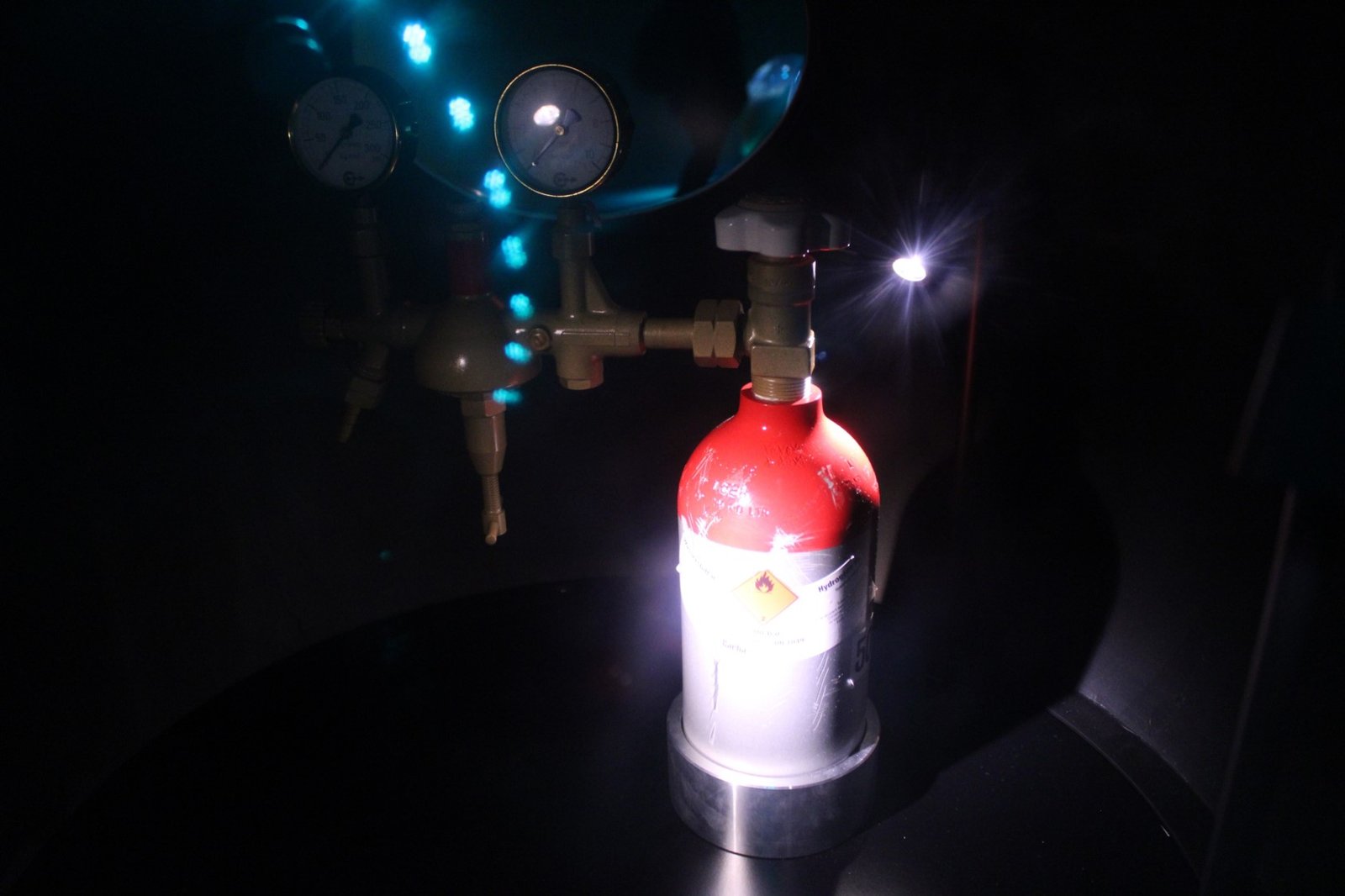 The top equation is from Standard Model, resumes all knowledge until now about subatomic particles and interactions between them. Bottom equation is String Theory, claims that particles are oscillating strings in 9 dimensions of space more one time dimension. This theory was created to unify the 4 fundamental forces of Universe: Gravity, Electromagnetic, Strong Nuclear and Weak Nuclear. The three later have been unified, only remains to include Gravity. 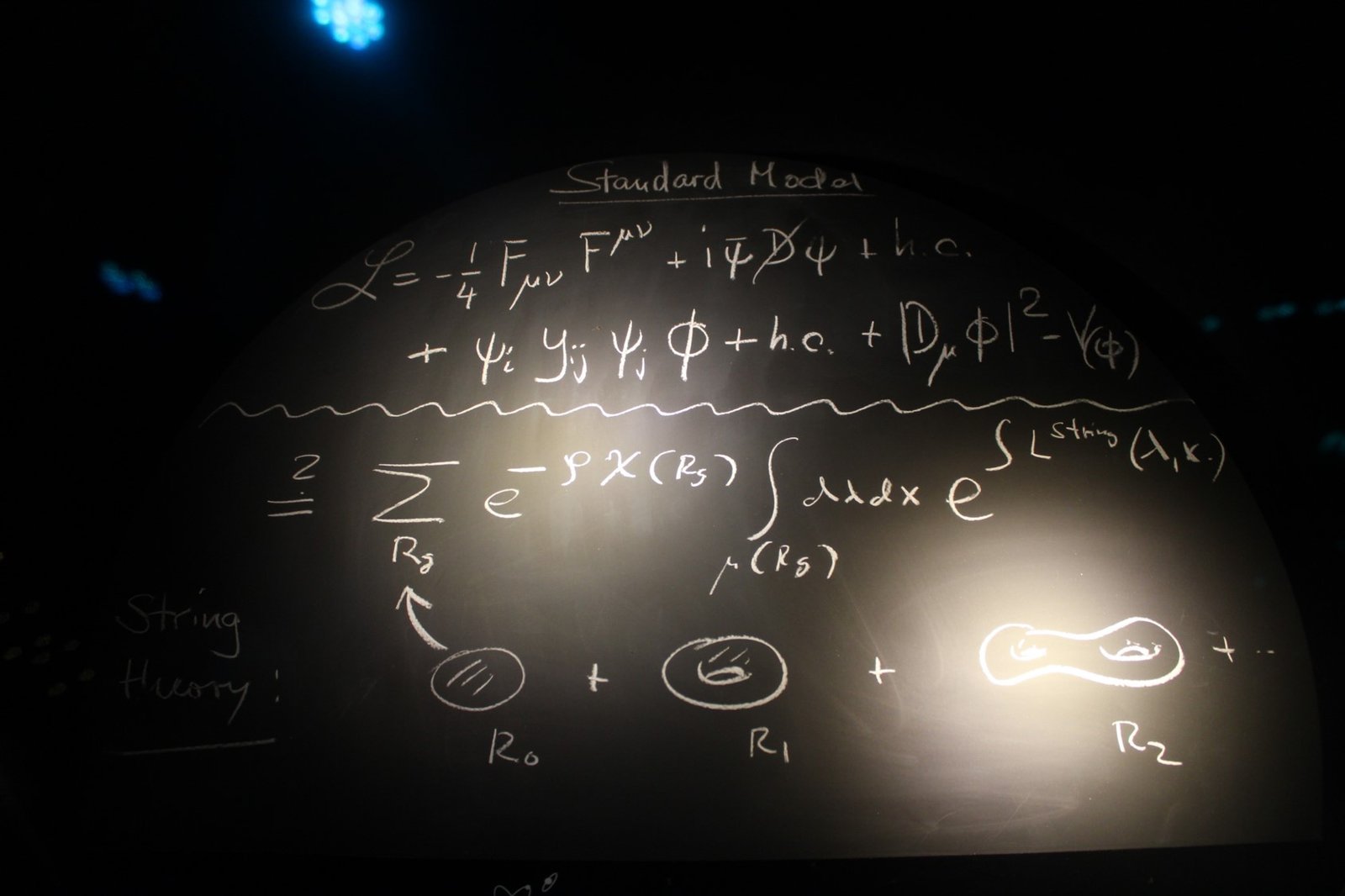 Scientific articles published independent from each other in 1964. Predicted Higgs boson, whose existence has been confirmed at LHC, in 2012. 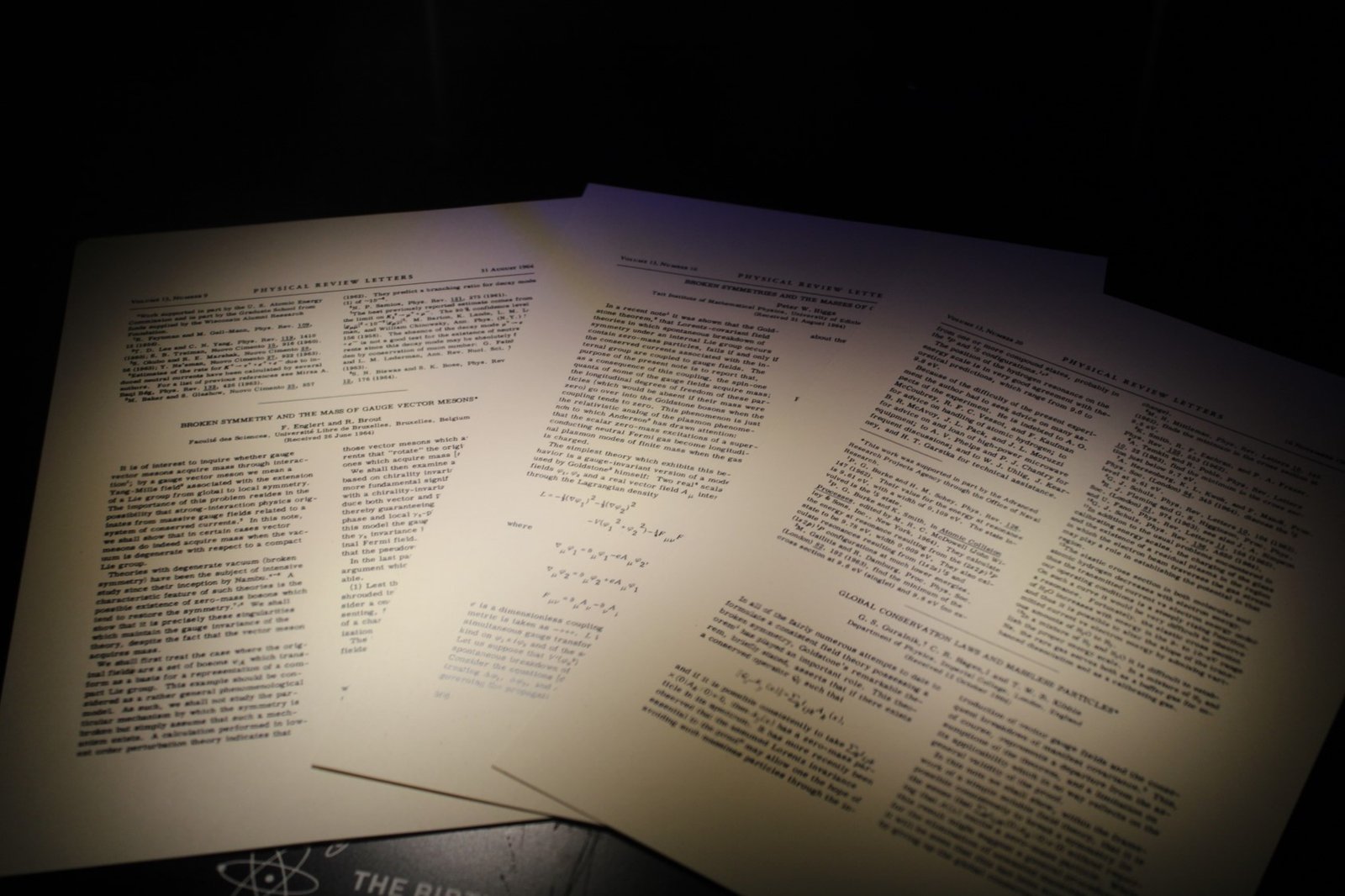 A image of LHC, the biggest particle accelerator in the world, seen from above. LHC is abbreviation of Large Hadron Collider. 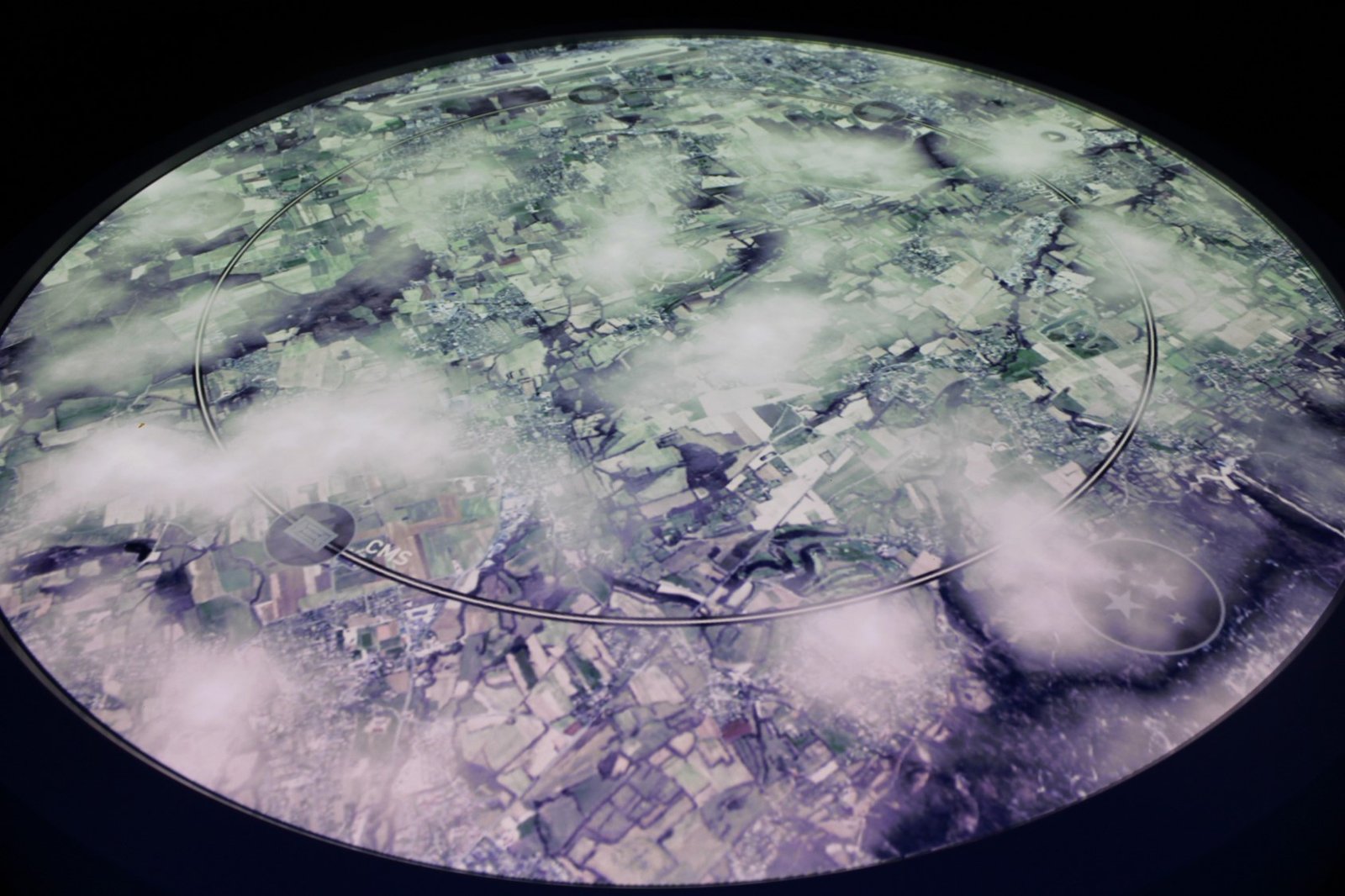 Cross section of one of 1232 LHC’s magnetic dipole. They are beam pipes surrounded by superconductors coils made of niobium-titanium alloy, cooled at 1.8 K (-271ºC/-456.43ºF). Provide a current of 18,500 A and magnetic field of 8.3 T. Coils’ magnetic fields are in opposite direction from each other, making two counter-rotating beams to circulate at same time. 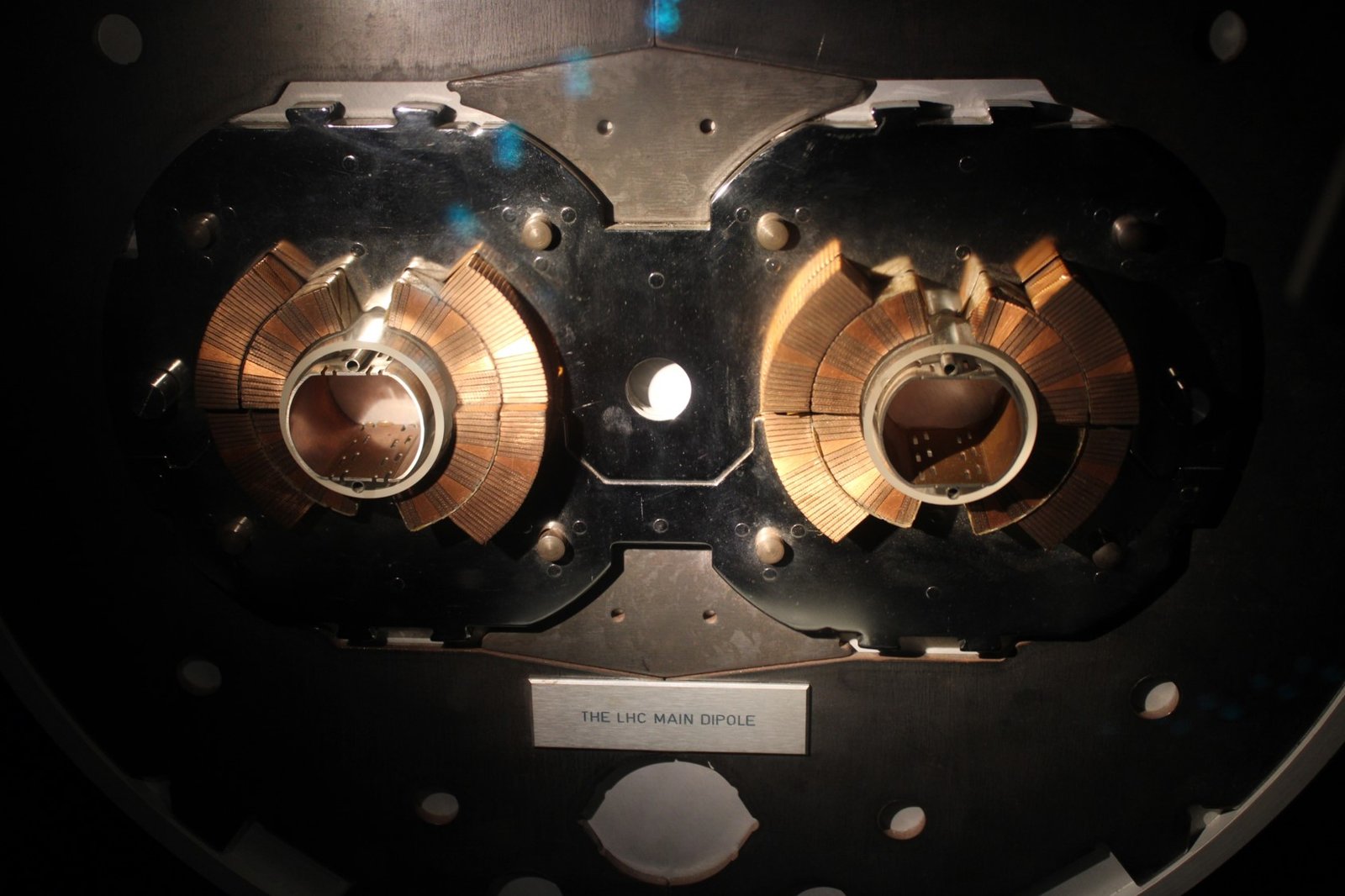 Crystal detectors made of lead tungstate (PbWO_{4}). More than 100,000 are used in LHC. When an electron or photon interact with one of nuclei, produces a “shower” of new particles in crystal. Scintillation light is directly proportional to particle’s energy which arrives in crystal. 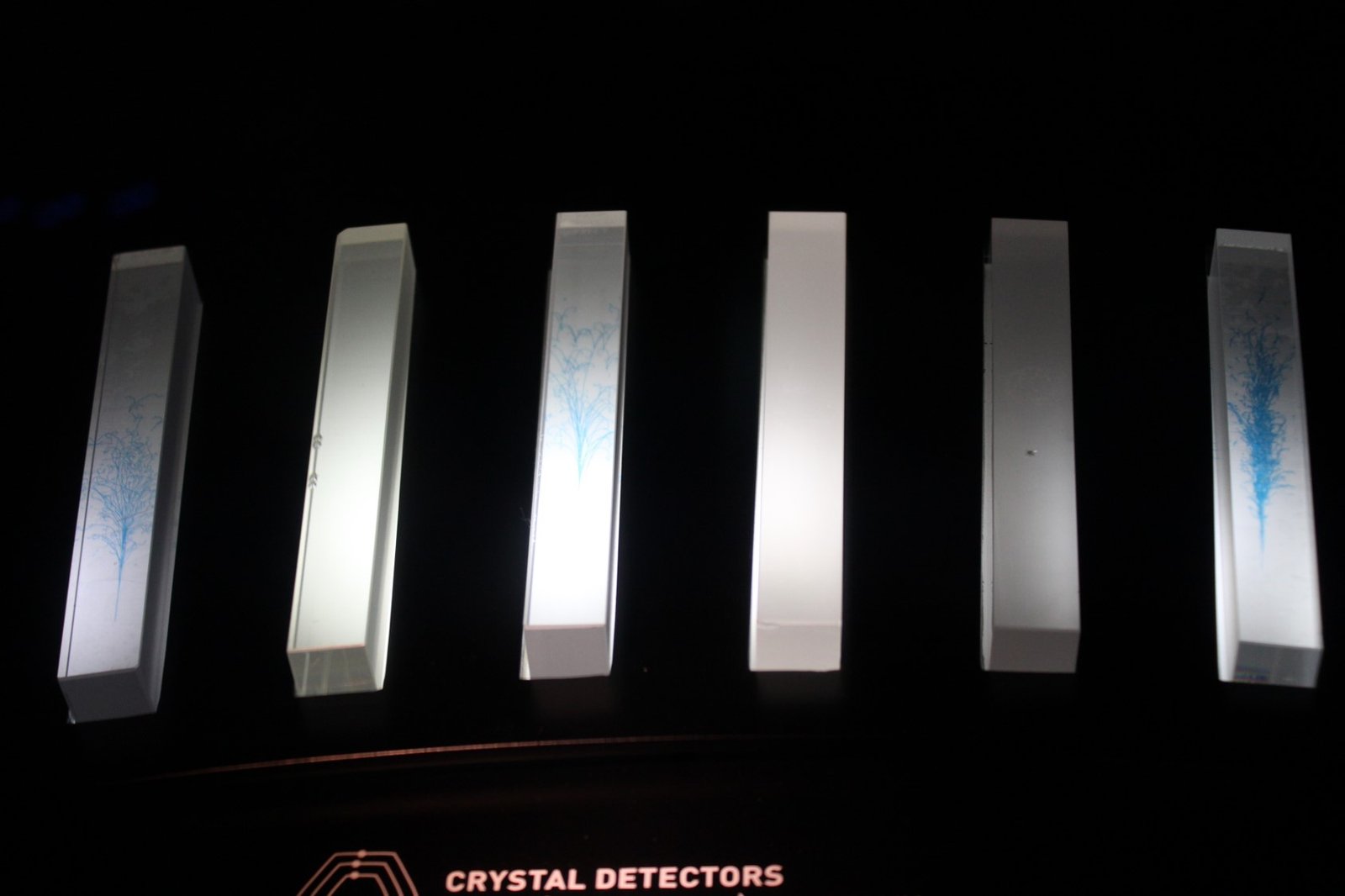 Silicon pixel detectors detect charged particles. Each silicon chip has an array of 8192 sensors and precision of 0.05 mm.

Antimatter trap model. Produced antiprotons are slowed down and captured applying oscillating electric field in ring-shaped electrodes. Inside the trap must have vacuum, otherwise antimatter enters in contact with common matter and there will be an energy explosion. 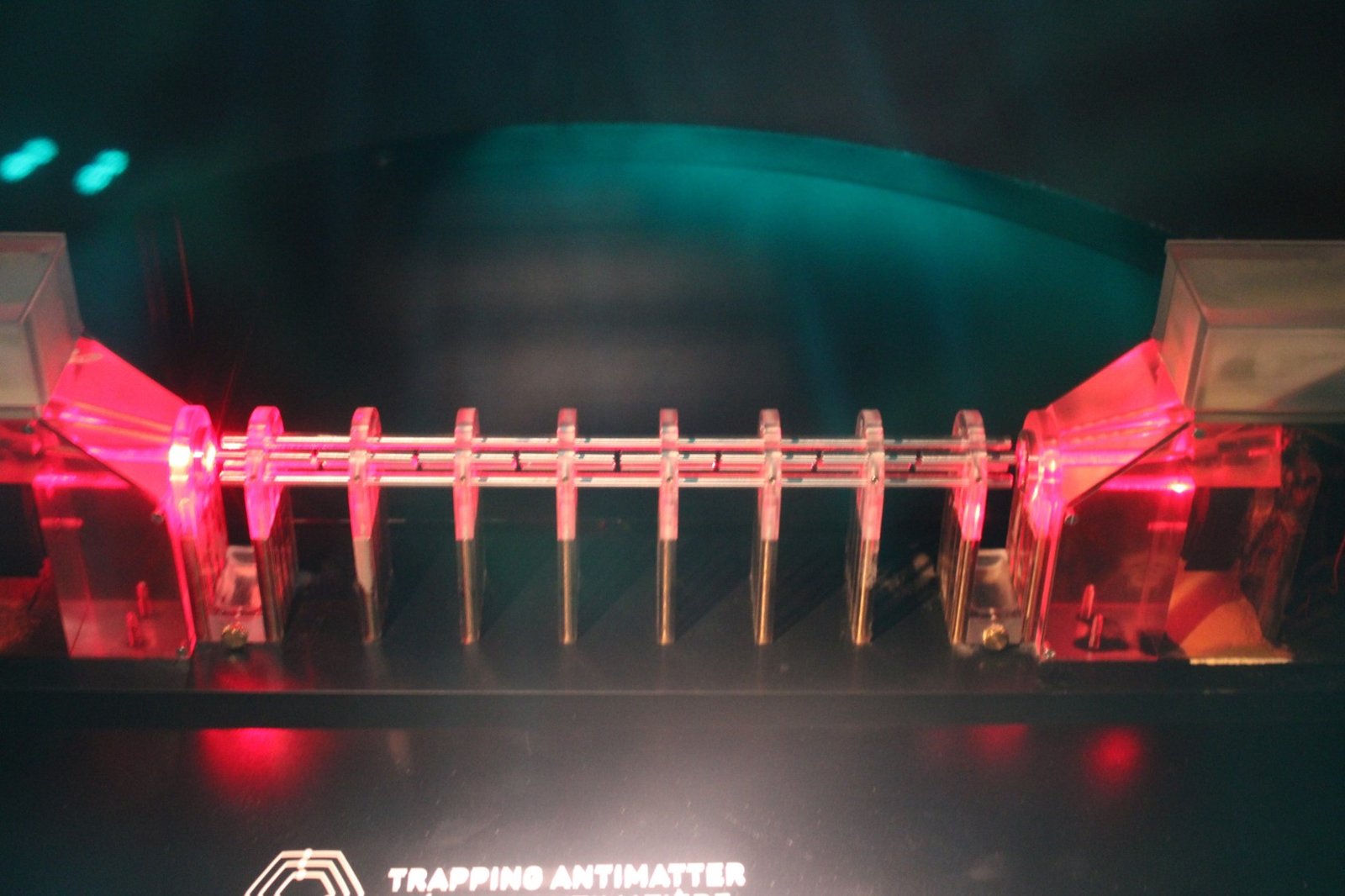 This is a tile calorimeter, measures energy of neutral and charged particles. Metal plates absorve particles, causing a “shower” and scintillating plastic tiles emit light which is detected and registered. 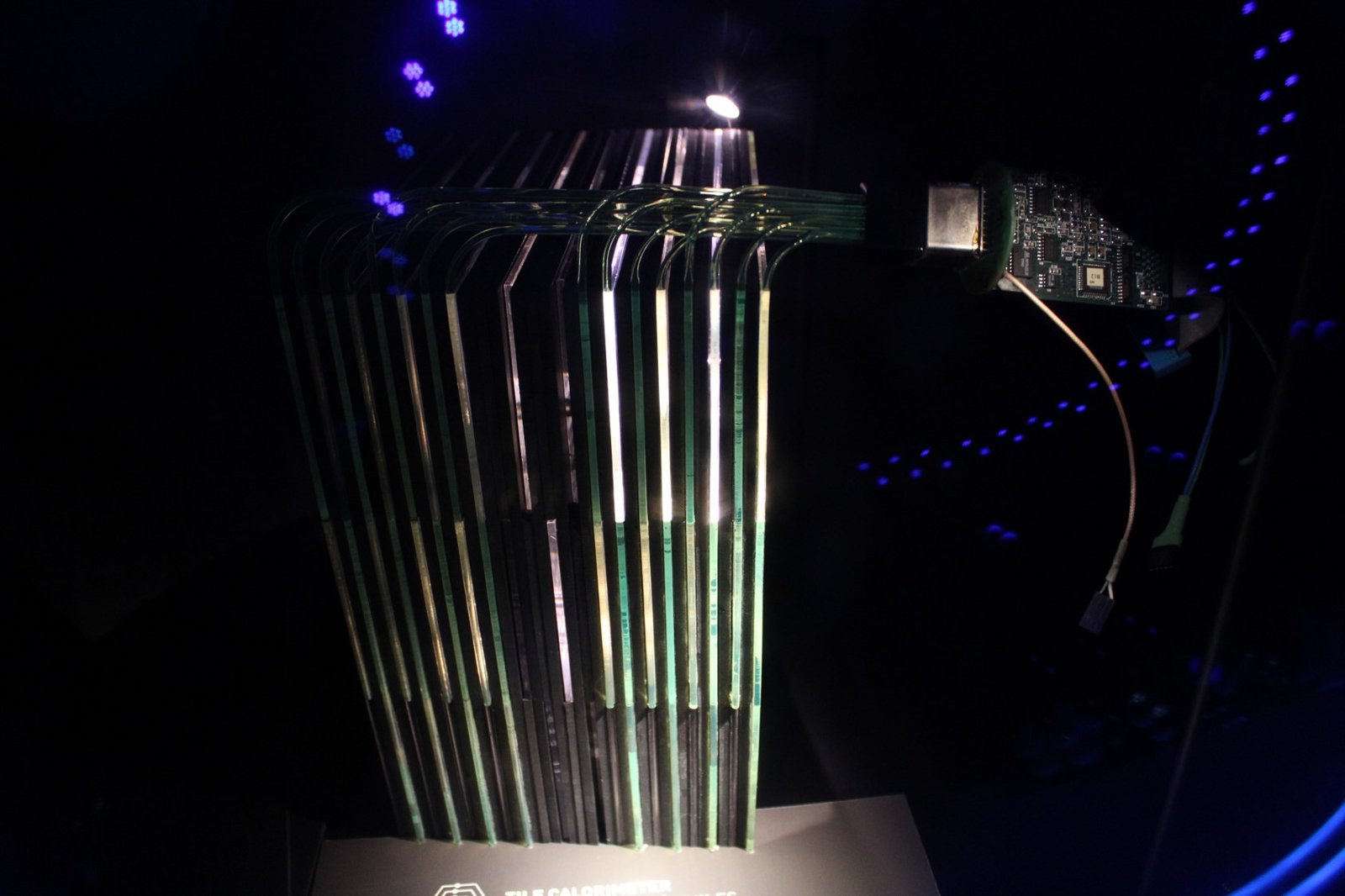 This NeXT workstation was the first web server. Used by Tim Bernes-Lee, which invented World Wide Web (WWW) in 1989, when worked at CERN. 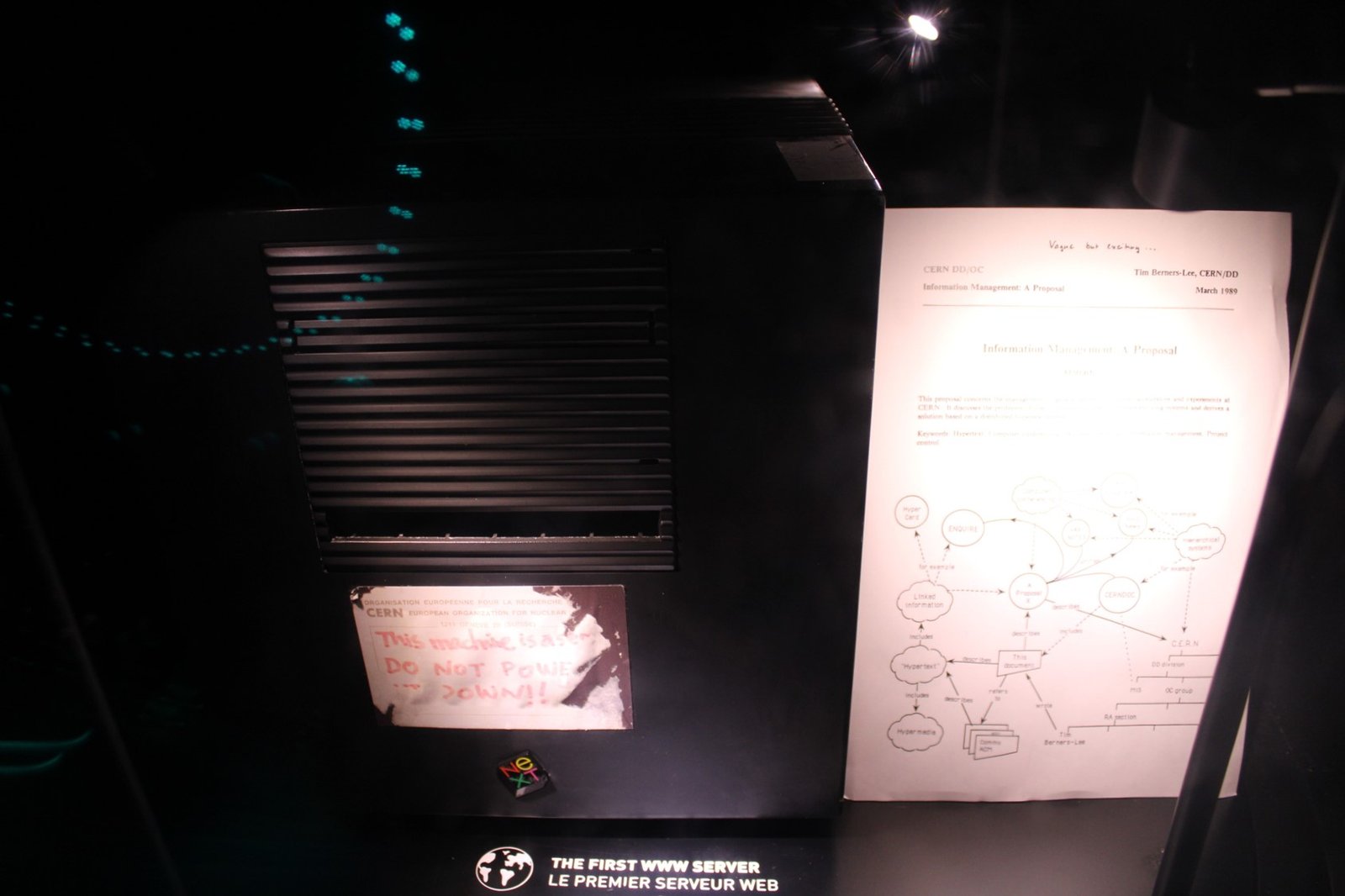 In the next part of visit to CERN, I will show images from visit to first CERN’s particle accelerator and another permanent exhibition: Microcosm. Stand by.