In this part, are explained the methods to measure the quantity of carbon-14 in organic material, allowing to determine a fossil’s age.

The button below access the first part about carbon-14.

In all methods, you must clean the sample manually, do chemical treatment, and transform it into carbon dioxide.

Carbonates like shells, limestone, and speleothems, are cleaned and the external part is dissolved with a weak acid. Because the external part may receive foreign carbon, causing errors in dating. To extract bones’ collagen, it’s applied modified Longin’s method.

After the chemical treatment, the sample goes to a quartz tube with copper oxide (CuO) and silver, at temperatures between 900ºC (1652°F) and 1000°C (1832ºF). The CuO is to obtain an oxygen source and the silver serves for isolating sulfur and halogens.

All air must be removed from the tube by a vacuum line.

The sample’s combustion produces steam, the later is frozen to separate from CO_{2}. The gas also passes through filtering by silver wool and oxidation with CuO, between 400ºC (752ºF) and 500ºC (932ºF). After purification, carbon dioxide is stored in a sealed glass tube.

This method counts the beta particles emitted by carbon-14 decay. After the CO_{2} purification, it’s put inside a conductor tube, where there is a conductor wire that receives high voltage. An insulating material must be between the wire (anode) and the cylinder (cathode).

This method uses the ionization principle. When a carbon-14 atom decays, beta particle is attracted by anode due to an electric field created by high voltage. Creating an ionization avalanche, producing many free electrons that will be attracted by the central wire. Accumulated electrons in the central wire go to R resistor and the electronic counter measures the voltage drop.

The scintillator substance butyl PBD is added to benzene. The butyl PBD produces a flash when detects a beta particle. Light particles are detected by photomultipliers and their signals are analyzed by computer, determining the age of organic material.

It’s considered the most efficient method, because samples can be smaller. Instead of count beta emittions, counts the quantity of carbon-14 in relation with carbon-12.

The CO_{2} must be converted in graphite. In the first stage of graphitization, a small quantity of iron powder is preheated at 90ºC (194ºF). Then, this iron passes through oxidation and reduction processes to increase its catalytic properties.

The reactions above are made with preheated iron powder, which serves as a catalyst. The graphite is deposited in the iron and pressed before being analyzed.

In one of the machine’s extremities, there are ion sources, which ionize carbon atoms with a cesium beam. Carbon atoms gain an extra electron and are accelerated by magnets and electrostatic devices. The injection magnet takes the graphite to Pelletron Accelerator. Where it is applied between 3 and 5 Megavolts in the positive pole to take electrons from carbon atom, making it a positive ion.

Due to very high voltage, the pelletron accelerator is internally covered by sulfur hexafluoride (SF_{6}), an electric insulator. After the conversion to positive ion, the sample goes to analyzing magnet, which turns the beam 90º. It is in this part where carbon isotopes are separated. The lightest atom, in this case, carbon-12, is the one that bends more.

For being the heaviest isotope, carbon-14 is the only one that reaches the heavy ion detector, where collides with isobutane gas (C_{4}H_{10}). The energy generated is measured and carbon-14 atoms can be counted.

The main disadvantage of AMS method is high cost. Due to sample size, greater care must be taken to avoid contamination. 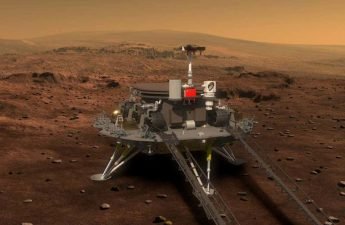