UAE space agency released the first images of its first probe to Mars, Hope or Al-Amal. Whose mission is to study the Martian atmosphere.

More information about the Hope probe, click on the following link.

Was taken by EXI (Emirates eXploration Imager) at 24,700 km of altitude, ate 20:36 UTC, on February 10, 2021. The image was created by a composition of EXI images in red, green and blue. North and south poles are in the upper left and lower right, respectively.

These false-color images of Mars were obtained by the Emirates Ultraviolet Spectrometer (EMUS) from an altitude of 36,000 km above the Martian surface. Each color represents light collected at a different ultraviolet wavelength and provides unique information about the Martian upper atmosphere, at the edge of space.

Images from left to right (with respective wavelengths in nanometers): Violet (102.6 nm) and blue (121.6 nm) show the reflection of sunlight from the extended cloud of hydrogen atoms surrounding the planet. Green (130.4 nm) shows the reflection of sunlight from oxygen atoms in the upper atmosphere. Orange (135.6 nm) shows energetic electrons causing other oxygen atoms to glow, similar to a fluorescent lamp. Red (140-160 nm) shows a combination of emissions coming from carbon monoxide molecules. The hydrogen, oxygen, and carbon monoxide in these images are produced by the breakdown of water and carbon dioxide in the atmosphere. By making observations like these, EMM will improve our knowledge of how the upper and lower atmosphere of Mars are connected and how the atmosphere has been slowly lost to space over the history of the solar system.

The Emirates Mars InfraRed Spectrometer (EMIRS), measures the thermal infrared energy emitted from the surface (surface temperature, top row) and its interaction with the atmosphere (temperatures at ~25 km altitude, bottom row). The first of many such images from EMIRS captured mostly the Martian nightside (purple-green-blue hues), though dawn can be seen on the right-hand side of the surface temperature image (red hues). Features such as Arabia Terra (low thermal inertia and thus cold night-time temperatures) can be observed in the upper left portion of the surface temperature data. EMIRS measurement footprints were mapped to the planet, colorized by temperature, and overlain on a Mars Orbiter Laser Altimeter (MOLA) shaded relief map (right column). Data between footprints were also interpolated, colorized, and overlain on MOLA shaded relief to form a continuous image (left column).

Images acquired from Tharsis region by EMIRS at 15,000 km altitude, on May 5.

The colored image from Emirates Exploration Imager (EXI) was generated using the camera’s red (635 nm) and ultraviolet (320 nm) filters. The red channel clearly shows the dark and light features of the Martian surface, while the water ice clouds stand out in the ultraviolet channel. The image was acquired on April 22, 2021, at a solar longitude of ~35°, which is spring in the northern hemisphere. Of note is the northern polar cap, likely beginning its retreat as the temperatures rise, with distinct clouds encircling it. Also visible along the terminator and eastern edge is a thin cloud layer as well as fairly continuous cloud cover to the west of Acidalia Planitia — the darker region at the upper center of the image. This composite image highlights the type of data that EXI will be routinely collecting now that the science phase of EMM’s mission has started.

The Emirates Ultraviolet Spectrometer (EMUS) took images of atomic hydrogen surrounding Mars on 24 & 25 April 2021 after transitioning to the Science Orbit. EMM is the first mission at any planet that is able to make images from different points of view over the course of a day. During the 10 hours 34 minutes between the images, the Hope probe moved from being over the planet near noon and viewing the entire dayside (top) to being over the planet at dusk and seeing both the day and night side (bottom). These images will be used to reconstruct the 3D distribution of hydrogen and learn more about its production through the process of splitting water molecules by sunlight and its eventual escape to space. 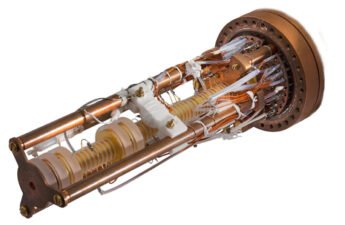 The BASE experiment with protons and antiprotons 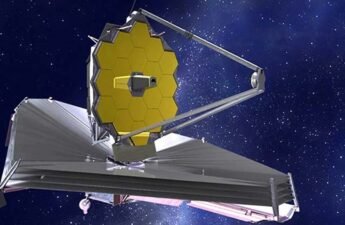 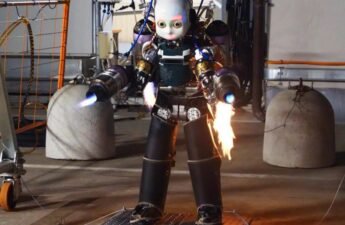